A Peek into Praxiteles 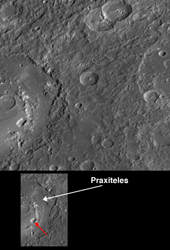 The large crater extending out the left side of this image is Praxiteles. Named for the ancient Greek sculptor of the 4th century BC, Praxiteles crater was first observed by Mariner 10. MESSENGER's high-resolution NAC images (one of which is shown here) and 11-color Wide Angle Camera (WAC) images have provided a detailed new look at this crater. Of particular interest are irregularly shaped depressions on the crater's floor, the largest of which is indicated by the red arrow and located just inward of the crater's peak ring. The colors near these depressions in WAC images are similar to those near volcanoes discovered during the mission's first Mercury flyby (see PIA11013 ) along the inner edge of the Caloris basin ( PIA10359 ). The similar colors and the association with the irregular depressions (possible volcanic vents) are suggestive of past volcanic activity on the floor of Praxiteles.