A Picture of Unsettled Planetary Youth 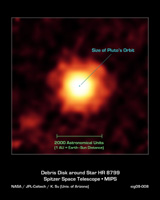 NASA's Spitzer Space Telescope captured this infrared image of a giant halo of very fine dust around the young star HR 8799, located 129 light-years away in the constellation Pegasus. The brightest parts of this dust cloud (yellow-white) likely come from the outer cold disk similar to our own Kuiper belt (beyond Neptune's orbit). The huge extended dust halo is seen as orange-red.

Astronomers think that the three large planets known to orbit the star are disturbing small comet-like bodies, causing them to collide and kick up dust. The extended dust halo has a diameter of about 2,000 astronomical units, or 2,000 times the distance between Earth and the sun. For reference, the size of Pluto's orbit is tiny by comparison, with a diameter of about 80 astronomical units.

This image was captured by Spitzer's multiband imaging photometer at an infrared wavelength of 70 microns in Jan. 2009.