Pluto and its Moons: Charon, Nix, and Hydra 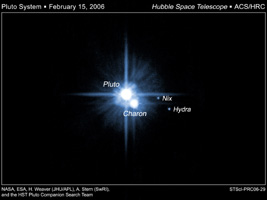 A pair of small moons that NASA's Hubble Space Telescope discovered orbiting Pluto now have official names: Nix and Hydra. Photographed by Hubble in 2005, Nix and Hydra are roughly 5,000 times fainter than Pluto and are about two to three times farther from Pluto than its large moon, Charon, which was discovered in 1978.