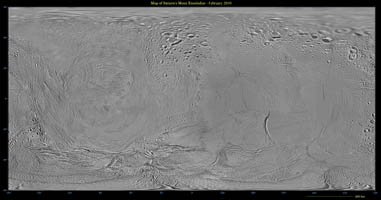 This map is an update to the version released in October 2009 (see PIA11680). Like other recent Enceladus global maps, this mosaic was shifted by 3.5 degrees to the west, compared to 2006 versions, to be consistent with the International Astronomical Union longitude definition for Enceladus.

The so-called "tiger stripe" features that have captivated Cassini scientists can be seen distorted by the projection method in the lower middle left and lower middle right of the image.

This map contains just one image from NASA's Voyager 2 spacecraft, which visited Enceladus more than 25 years ago. That image fills in the top left of the map from 90 degrees north down to as low as 50 degrees north in places. Other parts of the map include low-resolution Cassini Imaging Science Subsystem images.

The map is an equidistant (simple cylindrical) projection and has a scale of 110 meters (360 feet) per pixel at the equator. The mean radius of Enceladus used for projection of this map is 252 kilometers (157 miles).