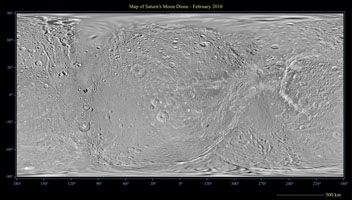 The map is a simple cylindrical (equidistant) projection and has a scale of 153 meters (500 feet) per pixel at the equator. The resolution of the map is 64 pixels per degree. The mean radius of Dione used for projection of this map is 563 kilometers (350 miles). Like the 2008 version of the map ( PIA08413 ), this updated map has been shifted west by 0.6 degrees of longitude, compared to the 2006 version of the map ( PIA08341 ), in order to conform to the International Astronomical Union longitude system convention for Dione.