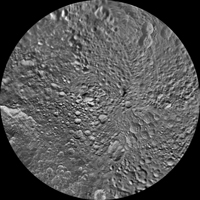 Non-annotated Image
Click on the image for larger version

The southern hemisphere of Saturn's moon Mimas is seen in these polar stereographic maps, mosaicked from the best-available Cassini and Voyager images.

Each map is centered on one of the poles, and surface coverage extends to the equator. Grid lines show latitude and longitude in 30-degree increments. The scale in the full-size versions of these maps is 216 meters (710 feet) per pixel. The resolution of the map is 16 pixels per degree. The mean radius of Mimas used for projection of these maps is 198.2 kilometers (123.2 miles).

The Cassini-Huygens mission is a cooperative project of NASA, the European Space Agency and the Italian Space Agency. JPL manages the mission for the Science Mission Directorate at NASA Headquarters in Washington. The Cassini orbiter and its two onboard cameras were designed, developed and assembled at JPL. The imaging team is based at the Space Science Institute, Boulder, Colo.