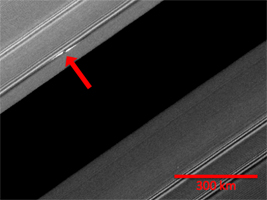 A propeller-shaped structure created by an unseen moon is brightly illuminated on the sunlit side of Saturn's rings in this image obtained by NASA's Cassini spacecraft.

The moon, which is too small to be seen, is at the center of the propeller structure visible in the upper left of the image, near the Encke Gap of the A ring (marked with a red arrow in the annotated version). The A ring is the outermost of Saturn's main rings.

The moon is likely about a kilometer (half a mile) across. Disturbed ring material to the upper left and lower right of the moon reflects sunlight brightly and appears like a white airplane propeller. Several density waves are also visible in the ring. A spiral density wave is a spiral-shaped accumulation of particles that tightly winds many times around the planet. It is the result of gravitational tugs by individual moons whose orbits are in resonance with the particles' orbits at a specific distance from Saturn.

This image is part of a growing catalogue of "propeller" moons that, despite being too small to be seen, enhance their visibility by creating larger disturbances in the surrounding fabric of Saturn's rings. Cassini scientists now have tracked several of these individual propeller moons embedded in Saturn's disk over several years.

These images are important because they represent the first time scientists have been able to track the orbits of objects in space that are embedded in a disk of material. Continued monitoring of these objects may lead to direct observations of the interaction between a disk of material and embedded moons. Such interactions help scientists understand fundamental principles of how solar systems formed from disks of matter. Indeed, Cassini scientists have seen changes in the orbits of these moons, although they don't yet know exactly what causes these changes.

This same propeller can be seen casting a shadow around the time of the planet's equinox in PIA11672 . See PIA07791 and PIA07792 to learn more about propeller shapes and to see smaller propellers.

Scale in the original image was 2 kilometers (1 mile) per pixel. The image has been rotated and contrast-enhanced to aid visibility. The cropped inset of the propeller included here was magnified by a factor of four.

This view looks toward the southern, sunlit side of the rings from about 81 degrees below the ring plane. The image was taken in visible light with the Cassini spacecraft narrow-angle camera on April 11, 2008. The view was obtained at a distance of approximately 364,000 kilometers (226,000 miles) from Saturn and at a sun-Saturn-spacecraft, or phase, angle of 82 degrees.

The Cassini-Huygens mission is a cooperative project of NASA, the European Space Agency and the Italian Space Agency. The Jet Propulsion Laboratory, a division of the California Institute of Technology in Pasadena, Calif., manages the mission for NASA's Science Mission Directorate, Washington, D.C. The Cassini orbiter and its two onboard cameras were designed, developed and assembled at JPL. The imaging operations center is based at the Space Science Institute in Boulder, Colo.