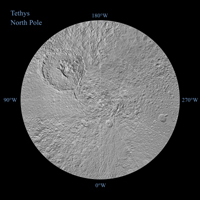 The northern hemisphere of Saturn's moon Tethys is seen in this polar stereographic map, mosaicked from the best-available images obtained by NASA's Cassini spacecraft.

The map is centered on the north pole, and surface coverage extends to the equator. Grid lines show latitude and longitude in 30-degree increments. The scale, in the full-size versions of the map, is 293 meters (960 feet) per pixel. The mean radius of Tethys used for projection of these maps is 536.3 kilometers (333.2 miles).

The huge Odysseus Crater (450 kilometers or 280 miles across) can be seen in the upper left of the north pole map, in the northern latitudes between the leading hemisphere and side of Tethys that faces away from Saturn.