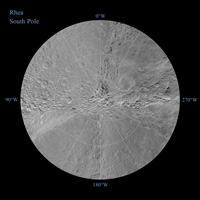 The southern hemisphere of Saturn's moon Rhea is seen in this polar stereographic maps, mosaicked from the best-available images obtained by NASA's Cassini spacecraft.

The map is centered on the south pole, and surface coverage extends to the equator. Grid lines show latitude and longitude in 30-degree increments. The scale in the full-size versions of these maps is 417 meters (1,400 feet) per pixel. The mean radius of Rhea used for projection of these maps is 764.1 kilometers (474.8 miles).