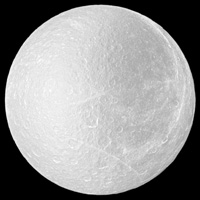 Hemispheric color differences on Saturn's moon Rhea are apparent in this false-color view from NASA's Cassini spacecraft. This image shows the side of the moon that always faces the planet.

In this image, the left half of the visible disk of Rhea faces in the direction of Rhea's orbital motion around Saturn, while the right side faces the trailing direction. It is not unusual for large icy Saturnian satellites to exhibit hemispheric albedo (reflectivity) and color differences. These differences are likely related to systematic regional changes in surface composition or the sizes and mechanical structure of grains making up the icy soil. Such large-scale variations can arise from numerous processes, such as meteoritic debris preferentially hitting one side of Rhea. The differences can also arise from "magnetic sweeping," a process that happens when ions that are trapped in Saturn's magnetic field drag over and implant themselves in Rhea's icy surface. The slightly reddish false-color hues near Rhea's poles identify subtle composition changes that might be caused by differences in the surface exposure to meteoric debris falling into the moon or implantation of ions. These differences could vary by latitude. They suggest that at least some of the color differences are exogenic, or derived externally.

This view was captured during Cassini's March 2, 2010 flyby of Rhea. To create the false-color view, ultraviolet, green and infrared images were combined into a single picture that isolates and maps regional color differences. This "color map" was then superimposed over a clear-filter image that preserves the relative brightness across the body.

This view looks toward the Saturn-facing side of Rhea (1528 kilometers, 949 miles across). North is up. The images were taken with the Cassini spacecraft wide-angle camera. The view was acquired at a distance of approximately 35,000 kilometers (22,000 miles) from Rhea and at a sun-Rhea-spacecraft, or phase, angle of 3 degrees. Image scale is 2 kilometers (1 mile) per pixel.