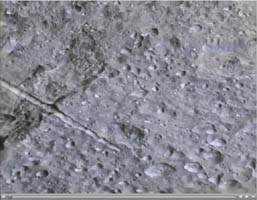 The Cassini orbiter has revealed many surprises within the Saturn system, including the possible presence of a ring of debris surrounding the ancient heavily cratered surface of Rhea, Saturn's second largest moon. Until now, no direct visual evidence of Rhea's suspected ring has been detected. This perspective view shows one of a series of relatively blue patches that form a very narrow band only 10 kilometers wide that straddles Rhea's equator. This view was created using stereo topography generated by Dr. Paul Schenk ( http://www.lpi.usra.edu/lpi/schenk/ ) of the Lunar and Planetary Institute in Houston Texas from Cassini imaging data returned in 2008. The bluish material is believed to be fresh ice reexposed when material from Rhea's ring struck the surface along the equator, and is a target of investigation for the March 2 Cassini flyby of Rhea. The smaller craters with the bluish deposits in the center of the frame are about 3 to 10 kilometers wide and less than one kilometer deep. This view is looking toward the west along the equator. The colors have been enhanced to highlight the color differences between these patches and the more typical cratered terrains of Rhea.

The raw data from which this product was developed were retrieved from the Planetary Data System's Cassini archives. The Cassini-Huygens mission is a cooperative project of NASA, the European Space Agency and the Italian Space Agency. The Jet Propulsion Laboratory, a division of the California Institute of Technology in Pasadena, manages the mission for NASA's Science Mission Directorate, Washington, D.C. The Cassini orbiter and its two onboard cameras were designed, developed and assembled at JPL. The imaging operations center is based at the Space Science Institute in Boulder, Colo. ( http://ciclops.org ) Data processing for this image was performed at the Lunar and Planetary Institute in Houston, Texas.