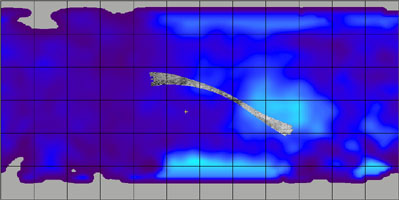 In a sweeping mosaic of the low latitudes of Saturn's moon Titan, the bright landmass of the enigmatic region known as Xanadu stands out on the right-hand side of this radar image obtained by NASA's Cassini spacecraft. The annotated version shows Xanadu in a yellow box. In this radar image, objects appear bright when they are tilted toward the spacecraft or have rough surfaces.

Xanadu is an area replete with bright and presumably dry river channels. In one location, the channels appear to have flowed out of the rough region of Xanadu into a broad drainage basin. (See PIA10956 for a closer view.) In some cases, the delta spreads as wide as 5 kilometers (about 3 miles) -- about the size of the River Thames at its mouth east of London. The annotated version shows this drainage basin in red.

Further to the right are mountainous materials, in places delineated by straight and arced margins. These areas provide more evidence that tectonic forces are at play in shaping Xanadu (see PIA10654 ). The mountainous area is highlighted in a blue box in the annotated version.

On the left of the image, the dark plains making up much of Titan's low-to-mid latitude surface are seen. They often consist of dune forms, boxed in green in the annotated version, that are broken in places by brighter outcrops of bedrock.

Cassini's radar instrument obtained these images on May 28, 2008. They make up the last swath obtained during Cassini's prime mission. The swath runs from west (left) to east (right), passing over Titan's low latitudes. Towards the center, features as small as about 300 meters (1,000 feet) can be observed.

This swath maps terrain from 25 degrees north latitude, 225 degrees west longitude to 30 degrees south latitude, 100 degrees west longitude, in a broad arc covering 6,000 kilometers (about 3,730 miles), and about 170 kilometers (105 miles) at the narrowest point. Illumination is from the north (top). The joints between individual radar beams are visible as long, straight lines that run across parts of the swath. They are not features on Titan's surface.

A contextual image (see above) shows where the footprint is on a cylindrical projection map of the entirety of Titan. Vertical lines for longitude and horizontal lines for latitude are spaced about 30 degrees apart.