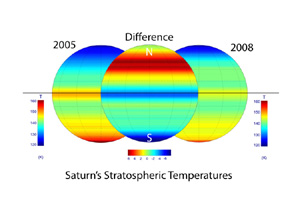 This figure shows shifting stratospheric temperatures obtained by NASA's Cassini spacecraft between 2005 (left) to 2008 (right). The difference between the temperatures is shown in the middle, with red indicating warming in the stratosphere and blue indicating cooling.

The most warming was observed in the northern mid-latitudes, in regions emerging from the shadow of Saturn's rings. The most cooling was observed in a collar around the south pole, as direct sunlight shifted away from that region. The changes were about 6 to 8 Kelvin (about 11 to 14 degrees Fahrenheit).

The temperature changes show the effect of changing seasons on the giant planet. Cassini arrived at Saturn in 2004, when the planet was in the middle of a balmy southern summer with its south pole oriented towards the sun. The north pole was shrouded in winter darkness. Around August 2009, Cassini observed the equinox, when the sun shone over Saturn's equator, lighting the rings edge-on only and warming both hemispheres the same amount. That was the start of southern autumn and northern spring.

The black line in the figure represents Saturn's equator and the plane of its rings. The annotated version includes color-coded temperature scales at the bottom.

Cassini's composite infrared spectrometer obtained data on the changing temperatures from October 2004 to July 2009. The figures on the left and right were assembled from two subsets of the data, providing complete global coverage from pole to pole in 2005 and 2008. The data represent mean temperatures by latitude and were not dependent on longitude. The graphic uses some artistic interpretation in spreading out the latitudinal data.

More information and images are available at http://www.nasa.gov/cassini and http://saturn.jpl.nasa.gov .

The Cassini-Huygens mission is a cooperative project of NASA, the European Space Agency and the Italian Space Agency. JPL, a division of the California Institute of Technology in Pasadena, manages the mission for NASA's Science Mission Directorate, Washington, D.C. The Cassini orbiter was designed, developed and assembled at JPL. The composite infrared spectrometer team is based at NASA's Goddard Space Flight Center, Greenbelt, Md., where the instrument was built.