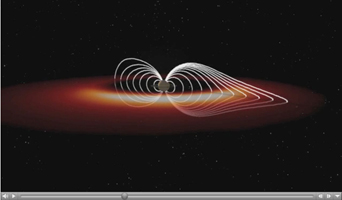 This animation based on data obtained by NASA's Cassini spacecraft shows how the "explosions" of hot plasma on the night side (orange and white) periodically inflate Saturn's magnetic field (white lines). Cassini scientists have been able to compute the "pressure" that the hot plasma exerts on the surrounding magnetic field by using remote images of the previously invisible hot plasma taken by the ion and neutral camera, part of the magnetospheric imaging instrument on board Cassini. These enormous clouds of hot plasma recur in the part of the magnetosphere known as the magnetotail roughly every 10 to 11 hours. They rotate around Saturn at a distance of about eight to 15 times the radius of Saturn. Scientists have finally been able to demonstrate that the pressure contained in these clouds is sufficient to inflate the magnetic field in a manner that is consistent with the periodic magnetic field signals that have puzzled them for so long. As the high- and low-pressure systems of atmospheric weather on Earth produce winds, pressures in space produce huge electrical currents, which in turn distort the magnetic field. The animation is based on data that were collected from Dec. 17 to 18, 2004.

The Cassini-Huygens mission is a cooperative project of NASA, the European Space Agency and the Italian Space Agency (ASI). The Jet Propulsion Laboratory, a division of the California Institute of Technology, Pasadena, manages the mission for NASA's Science Mission Directorate, Washington. The Cassini orbiter was designed, developed and assembled at JPL. The magnetospheric imaging instrument was designed, built and is operated by an international team led by the Applied Physics Laboratory of the Johns Hopkins University, Laurel, Md. The radio and plasma wave science experiment team is based at the University of Iowa, Iowa City.