Saturn Plasma and Radio Waves, as Seen by Cassini 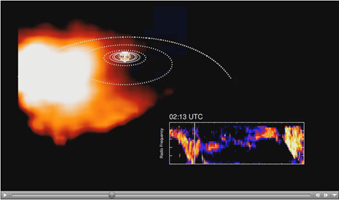 This animation, derived from data obtained by NASA's Cassini spacecraft, shows how plasma swirling around Saturn is correlated to bursts of radio waves emanating from the planet. The data shown on the upper portion of the screen were obtained by the ion and neutral camera, part of the magnetospheric imaging instrument. When the plasma gets hot, it goes from red to white. The bottom part of the screen shows data from Cassini's radio and plasma wave subsystem. The data were obtained from 12:01 a.m. UTC to 11:55 a.m. UTC on Oct. 7, 2008.

The Cassini-Huygens mission is a cooperative project of NASA, the European Space Agency and the Italian Space Agency (ASI). The Jet Propulsion Laboratory, a division of the California Institute of Technology, Pasadena, manages the mission for NASA's Science Mission Directorate, Washington. The Cassini orbiter was designed, developed and assembled at JPL. The magnetospheric imaging instrument was designed, built and is operated by an international team led by the Applied Physics Laboratory of the Johns Hopkins University, Laurel, Md. The radio and plasma wave science experiment team is based at the University of Iowa, Iowa City.