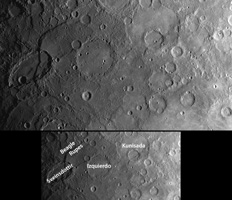 When MESSENGER first flew by Mercury on January 14, 2008, MDIS acquired images of a large portion of Mercury's surface that had never previously been seen by spacecraft. This mosaic of NAC images shows some of the geologic features discovered during that first flyby that have been subsequently named: the curving cliff face of Beagle Rupes , the elongated crater Sveinsdottir , and the craters Izquierdo and Kunisada flooded with lava.

This year, the MESSENGER spacecraft is positioned once again to visit the Solar System's innermost planet. However, this time, the spacecraft won't just pass by. On March 18, 2011, a 15-minute maneuver will place MESSENGER in orbit about Mercury, making it the first spacecraft ever to do so. The MESSENGER mission will then begin an extensive year-long science campaign to unravel Mercury's mysteries . 2011 promises to be an exciting year of further discoveries for the MESSENGER mission.