Movie of Enceladus “Footprint” on Saturn 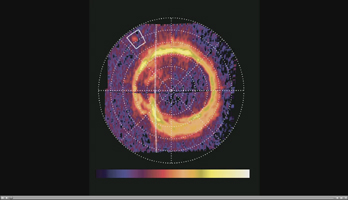 NASA's Cassini spacecraft has spotted a glowing patch of ultraviolet light near Saturn's north pole that marks the presence of an electrical circuit that connects Saturn with its moon Enceladus. This newly discovered patch occurs at the "footprint" of the magnetic connection between Saturn and Enceladus and indicates electrons and ions accelerating along magnetic field lines. White boxes indicate the location of this footprint, which scientists have long predicted but never before seen.

The patch glows because of the same phenomenon that makes Saturn's well-known north and south polar auroras glow: energetic electrons diving into the planet's atmosphere. However, the footprint is not connected to the rings of auroras around Saturn's poles.

The footprint was located about 65 degrees north latitude. It measured about 1,200 kilometers (750 miles) in the longitude direction and less than 400 kilometers (250 miles) in latitude, covering an area comparable to that of California or Sweden.

In the brightest image the footprint shone with an ultraviolet light intensity of about 1.6 kilorayleighs, far less than the Saturnian polar auroral rings. This is comparable to the faintest aurora visible at Earth without a telescope in the visible light spectrum. The sun was illuminating Saturn's north pole from the left and the footprint was on the day side of the planet. The night side of the planet was to the right of the hashed line.

The Cassini-Huygens mission is a cooperative project of NASA, the European Space Agency and the Italian Space Agency. NASA's Jet Propulsion Laboratory, a division of the California Institute of Technology in Pasadena, manages the mission for NASA's Science Mission Directorate, Washington, D.C. The Cassini orbiter was designed, developed and assembled at JPL. The ultraviolet imaging spectrograph was designed and built at, and the team is based at the University of Colorado, Boulder.