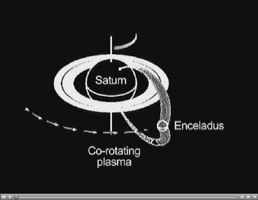 This animated graphic shows how Saturn and its moon Enceladus are electrically linked. Magnetic field lines, invisible to the human eye but detectable by the fields and particles instruments on NASA's Cassini spacecraft, arc from Saturn's north polar region to south polar region. Enceladus resides in the arc of a set of the field lines and feeds charged particles into the Saturn atmosphere.

As Enceladus orbits around Saturn, the "footprint" of its connection to Saturn's north polar region, visible in ultraviolet light, also rotates. A doughnut of plasma, or hot ionized gas, revolves around Saturn at the same pace as the planet turns. The interaction of this plasma cloud with Enceladus shoots electrons along the magnetic field lines into the polar region of Saturn. The rain of electrons into Saturn's atmosphere creates an ultraviolet glow in an aurora-like phenomenon.

Cassini's radio and plasma wave science instrument has detected a "hiss-like" radio noise generated by electrons moving along magnetic field lines from Enceladus to the glowing patch of ultraviolet light on Saturn.