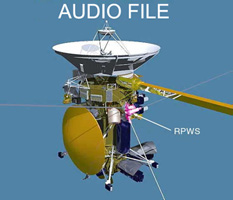 NASA's Cassini spacecraft captured these sounds of lightning strikes at Saturn on March 15, 2011, during the largest and most intense storm observed up-close at Saturn. Lightning at Saturn creates phenomena known as Saturn electrostatic discharges, which are like the static that Earth lightning creates on an AM radio. The amplitude and duration of the Saturn lightning radio signals were used to create the audio signals heard here.

Cassini's radio and plasma wave instrument first detected this storm on Dec. 5, 2010, through these Saturn electrostatic discharges. The storm is still raging. At its most active, lightning flashes occurred at a rate of more than 10 per second. This was so frequent, in fact, that Cassini could no longer resolve individual strokes. On March 15, when these data were collected, the strike intensity was slightly lower and easier to resolve.

This 11-second clip covers data obtained over a period of 57 seconds.

The Cassini-Huygens mission is a cooperative project of NASA, the European Space Agency and the Italian Space Agency (ASI). NASA's Jet Propulsion Laboratory in Pasadena, Calif., manages the mission for NASA's Science Mission Directorate at the agency's headquarters in Washington. The Cassini orbiter was designed, developed and assembled at JPL. The radio and plasma wave science team is based at the University of Iowa, Iowa City.

JPL is a division of the California Institute of Technology in Pasadena.

For more information about the Cassini-Huygens mission, visit http://www.nasa.gov/cassini and http://saturn.jpl.nasa.gov/home/index.cfm .