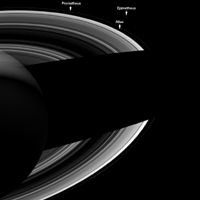 Saturn's small moons Atlas, Prometheus, and Epimetheus keep each other company in this Cassini spacecraft image of the planet's night side. It seems fitting that they should do so since in Greek mythology, their namesakes were brothers.

This view looks toward the unilluminated side of the rings from about 30 degrees below the ringplane. The image was taken in visible light with the Cassini spacecraft wide-angle camera on Sept. 19, 2012.

The view was obtained at a distance of approximately 1.4 million miles (2.2 million kilometers) from Saturn and at a Sun-Saturn-spacecraft, or phase, angle of 96 degrees. Image scale is 80 miles (128 kilometers) per pixel. Epimetheus has been brightened by a factor of 1.5 and Atlas' brightness has been enhanced by a factor of 3 relative to the rings and Prometheus to improve visibility.