A Dance of Two Suns and One Planet (Artist Concept) 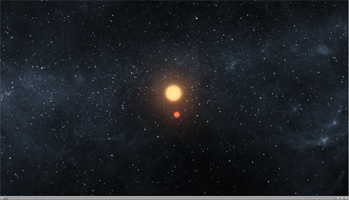 This artist's animation illustrates the Kepler-16 system from an overhead view, showing the eccentric orbits of the two stars as they twirl around each other every 41 days like figure skaters. The planet, which was discovered by NASA's Kepler mission, orbits in a circle around both of the stars every 229 days. The larger of the stars is about 69 percent of the mass of the sun, and the smaller is about 20 percent of the sun's mass. The planet is about the mass of Saturn. All three bodies orbit in the same plane, which is why Kepler can observe the various planetary and stellar eclipses.

Though the planet orbits its star from a distance comparable to that of Venus in our own solar system, it is actually cold. This is because its two parent stars are both smaller than the sun and don't give off as much heat.