Birth of a Behemoth Storm 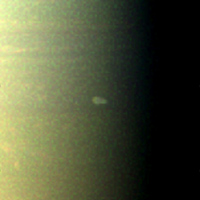 The largest storm to ravage Saturn in decades started as a small spot seen in this image from NASA's Cassini spacecraft on Dec. 5, 2010 -- the same day Cassini also detected frequent lightning signals.

The storm is visible as a spot on the terminator between night and day in the northern hemisphere. The spot appears slightly brighter than the surrounding clouds in an area about two-thirds of the way north of the equator.

Cassini's radio and plasma wave science instrument first detected the lightning radio signals associated with this storm on the day this image was captured. Cassini's cameras happened to be pointed at the right location thanks to the imaging team's "Storm Watch" observation campaign, which was designed to look for storms in the northern hemisphere as frequently as possible. Saturn's weather has been changing since the planet's August 2009 equinox brought spring to the north. Earlier in the Cassini mission, before equinox, Cassini tracked a large storm in the southern hemisphere (see PIA06197 ).

The shadow of the moon Mimas is visible as a black speck on the planet below the shadows of the rings. This view looks toward the southern, unilluminated side of the rings from just below the ring plane.

Images taken using red, green and blue spectral filters are usually combined to create a natural color view. Because a visible red light image was not available, an image taken using a spectral filter sensitive to wavelengths of near-infrared light centered at 752 nanometers was used in place of red. So the color is close to natural color, but is not exact.

The view was acquired at a distance of approximately 1.4 million miles (2.3 million kilometers) from Saturn and at a sun-Saturn-spacecraft, or phase, angle of 80 degrees. Image scale is 103 miles (166 kilometers) per pixel in the full-size image.

A second, zoomed-in inset is also included here (Figure 1). This view was magnified by a factor of five and further contrast enhanced in nearly true color to increase the visibility of features.

The Cassini-Huygens mission is a cooperative project of NASA, the European Space Agency and the Italian Space Agency. NASA's Jet Propulsion Laboratory, a division of the California Institute of Technology in Pasadena manages the mission for NASA's Science Mission Directorate, Washington. The Cassini orbiter and its two onboard cameras were designed, developed and assembled at JPL. The imaging team is based at the Space Science Institute, Boulder, Colo.