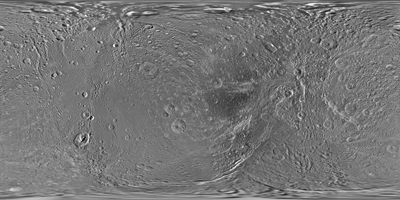 Unannotated Version (half size)
Click on the image for larger view

The map is a simple cylindrical (equidistant) projection and has a scale of 502 feet (153 meters) per pixel at the equator. The resolution of the map is 64 pixels per degree. The mean radius of Dione used for projection of this map is 350 miles (563 kilometers).

This map is an update to the version released in October 2010 (see PIA12814 ). This new map contains data from Cassini's Dec. 12, 2011, flyby of Dione. Improved coverage is in the area around 45 degrees north latitude, 210 degrees west longitude.

Like other recent Dione global maps, this map has been shifted west by 0.6 degrees of longitude, compared to the 2006 version of the map ( PIA08341 ), in order to conform to the International Astronomical Union longitude system convention for Dione.