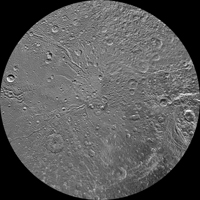 Unannotated Version (half size)
Click on the image for larger view

The northern and southern hemispheres of Dione are seen in these polar stereographic maps, mosaicked from the best-available clear-filter images from NASA's Cassini mission.

Each map is centered on one of the poles and surface coverage extends to the equator. Grid lines show latitude and longitude in 30-degree increments. The scale in the full-size versions of these maps is 502 feet (153 meters) per pixel. The resolution of the map is 64 pixels per degree. The mean radius of Dione used for projection of these maps is 350 miles (563 kilometers).