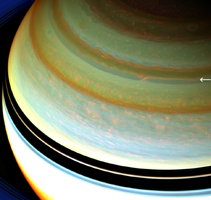 Clouds associated with the jet stream can be seen in the upper right about a third of the way down from the top of this image. The jet stream clouds appear like a thin, bright orange line here. Moving west and closer to the center of the image, the feature drops south. Farther to the west of this discontinuity, or drop, a blurrier form of the jet stream clouds continues to move along the latitude circle.

See PIA14917 for a closer view and to learn how eddies, or rotating storms, give the jet stream its shape and speed.

The winds of Saturn's jet streams are zonal, meaning they move eastward or westward at particular latitudes. This jet stream is located at about 42 degrees north latitude, and has been visible on Saturn since the days of NASA's Voyager spacecraft (see PIA00027 ). In the Voyager days, this jet stream had an undulating appearance, leading scientists to dub it the "ribbon wave" (see PIA01378 ). The planet's atmosphere is always changing, and the jet stream now looks nothing like a ribbon.

Saturn's atmosphere and its rings are shown here in a false color composite made from three images taken in near infrared light through filters that are sensitive to varying degrees of methane absorption. Red and orange colors in this view indicate clouds that are deep in the atmosphere. Yellow and green colors, most noticeable near the top of the view, indicate intermediate clouds. White and blue indicate high clouds and haze.

The white clouds of the equatorial region appear oversaturated because the image was specially processed to bring out the wave.

The rings, in the upper left and lower left of the image, appear bright blue because they are outside of the atmosphere and not affected by methane absorption. This view looks toward the northern, unilluminated side of the rings from about 36 degrees above the ring plane.

The view was acquired at a distance of approximately 810,000 miles (1.3 million kilometers) from Saturn and at a sun-Saturn-spacecraft, or phase, angle of 55 degrees. Image scale is 46 miles (74 kilometers) per pixel.

The Cassini-Huygens mission is a cooperative project of NASA, the European Space Agency, and the Italian Space Agency. NASA's Jet Propulsion Laboratory, Pasadena, Calif., manages the mission for NASA's Science Mission Directorate, Washington, D.C. The imaging team is based at the Space Science Institute, Boulder, Colo. JPL is a division of the California Institute of Technology, Pasadena.