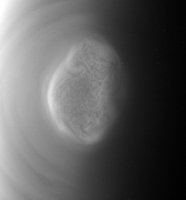 This true color image captured by NASA'S Cassini spacecraft before a distant flyby of Saturn's moon Titan on June 27, 2012, shows a south polar vortex, or a swirling mass of gas around the pole in the atmosphere.

Since Cassini arrived in the Saturn system in 2004, Titan has had a visible "hood" high above the north pole (see PIA08137 ). It was northern winter at Cassini's arrival, and much of the high northern latitudes were in darkness. But the hood, an area of denser, high altitude haze compared to the rest of the moon's atmosphere, was high enough to be still illuminated by sunlight. The seasons have been changing since Saturn's August 2009 equinox signaled the beginning of spring in the northern hemisphere and fall in the southern hemisphere for the planet and its many moons. Now the high southern latitudes are moving into darkness. The formation of the vortex at Titan's south pole may be related to the coming southern winter and the start of what will be a south polar hood.

See PIA14920 for a movie captured with a similar view and showing the polar vortex in motion.

These new, more detailed images are only possible because of Cassini's newly inclined orbits, which are the next phase of Cassini Solstice Mission. Previously, Cassini was orbiting in the equatorial plane of the planet, and the imaging team's images of the polar vortex between late March and mid-May were taken from over Titan's equator. At that time, images showed a brightening or yellowing of the detached haze layer on the limb, or edge of the visible disk of the moon, over the south polar region.

Scientists think these new images show open cell convection. In open cells, air sinks in the center of the cell and rises at the edge, forming clouds at cell edges. However, because the scientists can't see the layer underneath the layer visible in these new images, they don't know what mechanisms may be at work.

Cosmic ray hits on the camera detectors appear as bright dots in the black and white version of the image (Figure 1).

Images taken using red, green and blue spectral filters were combined to create this natural color view. The images were obtained with the Cassini spacecraft narrow-angle camera late on June 26, 2012 at a distance of approximately 301,000 miles (484,000 kilometers) from Titan. Image scale is 2 miles (3 kilometers) per pixel.