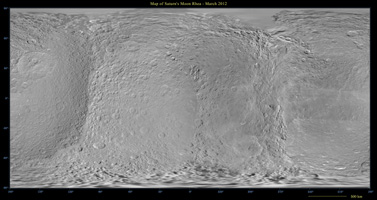 The map is an equidistant projection and has a scale of 417 meters (1,370 feet) per pixel in the full size version. The mean radius of Rhea used for projection of this map is 764.1 kilometers (474.8 miles).

This map is an update to the version released in January 2011 (see PIA12821 ). This map contains data from Cassini's March 10, 2012, flyby of Rhea. This map was created using primarily Cassini images. Six Voyager images fill gaps in Cassini's coverage of the north pole.