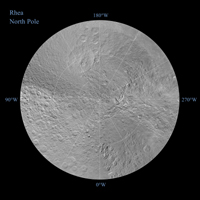 Six Voyager images fill in gaps in Cassini's coverage of the moon's north pole. These maps are updates to the versions released in January 2011 (see PIA12822 and PIA12823 ). These mosaics contain data from Cassini's March 10, 2012, flyby of Rhea.

Each map is centered on one of the poles, and surface coverage extends to the equator. Grid lines show latitude and longitude in 30-degree increments. The scale in the full-size versions of these maps is 417 meters (1,370 feet) per pixel. The mean radius of Rhea used for projection of these maps is 764.1 kilometers (474.8 miles).