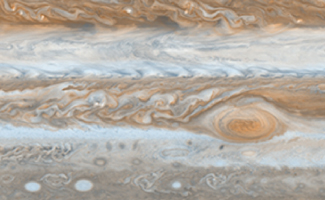 Following the path of one of Jupiter's jet streams, a line of v-shaped chevrons travels west to east just above Jupiter's Great Red Spot. Most of the planet is unfolded here in a single flat map made on December 11 and 12, 2000, when NASA's Cassini spacecraft flew past Jupiter. At the left, the chevrons run into another storm called the South Equatorial Disturbance (SED).

The Cassini-Huygens mission is a cooperative project of NASA, the European Space Agency and the Italian Space Agency. NASA's Jet Propulsion Laboratory, a division of the California Institute of Technology in Pasadena, manages the mission for NASA's Science Mission Directorate, Washington, DC. The Cassini orbiter was designed, developed and assembled at JPL. The visual and infrared mapping spectrometer was built by JPL, with a major contribution by the Italian Space Agency (ASI). The imaging operations center is based at the Space Science Institute in Boulder, Colo.