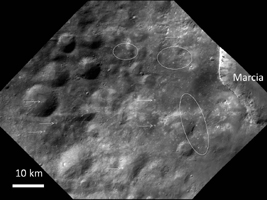 Numerous small, bright spots appear on Vesta, as seen in this image from NASA's Dawn spacecraft. This region is just north of the equator, to the west of Marcia crater in the Marcia quadrangle. The small spots are approximately several hundred yards (meters) in size.

This image was taken during Dawn's high-altitude mapping orbit (on average 420 miles or 680 kilometers above the surface). When Dawn looked more closely at these spots at lower altitude, scientists could see most of them were small craters with bright rims or craters with bright material on their walls.

The annotated version of this image highlights the location of some bright spots with white arrows and ovals.