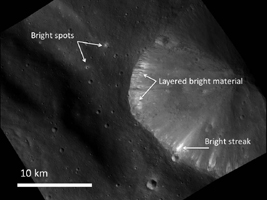 This image from NASA's Dawn spacecraft shows the brightest area seen on Vesta so far. It shows a crater located inside the rim of the Rheasilvia basin at the south pole of Vesta. The crater is on the edges of the Rheasilvia, Urbinia, and Pinaria quadrangles.

This image is part of a set of images taken by Dawn's framing cameras on Dec. 27, 2011, during the mission's low-altitude mapping orbit (on average 130 miles or 210 kilometers above the surface). This particular image was about 156 miles (230 kilometers) above the surface and covers an area about 250 square miles (600 square kilometers).