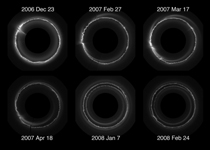 The constant change in Saturn's wavy, wiggly F ring is on display in this set of images obtained by NASA's Cassini spacecraft. The images show a view looking directly down onto the ring with the planet removed from the center. The radial distance from the center of the F ring has been exaggerated by a factor of 140 to make the wiggles and other radial structures more visible.

The regular patterns here primarily occur because of the gravitational pull of the moon Prometheus, which averages about 53 miles or 86 kilometers in diameter. Prometheus can create channels and snowballs as they part and push together icy F ring particles. These regular wiggles are about 65 miles (100 kilometers) from top to bottom.

Other processes are also at work. In the top left image, the object known as S/2004 S 6 -- which may be a moonlet or just a dense clump -- has produced an extended trail of material that can be seen at the top left of the image. A close-up of this event can be seen in PIA08863 . In some of the images (bottom row, middle and right image), a bright spiral ring is visible. This was caused by an object, possibly S/2004 S 6, colliding with the main F ring and producing a trail of particles that subsequently sheared right around the planet. These events give the F ring its multi-stranded appearance.

The Cassini-Huygens mission is a cooperative project of NASA, the European Space Agency and the Italian Space Agency. NASA's Jet Propulsion Laboratory, a division of the California Institute of Technology in Pasadena, manages the mission for NASA's Science Mission Directorate, Washington, D.C. The Cassini orbiter was designed, developed and assembled at JPL. The imaging operations center is based at the Space Science Institute in Boulder, Colo.