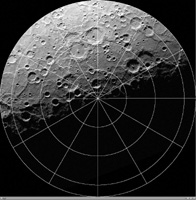 Instrument: Wide Angle Camera (WAC) of the Mercury Dual Imaging System (MDIS)
Scale: The large crater near Mercury's south pole, Chao Meng-Fu , has a diameter of 180 km
Map Information: The movie is shown in polar stereographic projection, extending northward to 73° S, and 0° longitude is at the top

The MESSENGER spacecraft is the first ever to orbit the planet Mercury, and the spacecraft's seven scientific instruments and radio science investigation are unraveling the history and evolution of the Solar System's innermost planet. Visit the Why Mercury? section of this website to learn more about the key science questions that the MESSENGER mission is addressing. During the one-year primary mission, MDIS acquired 88,746 images and extensive other data sets. MESSENGER is now in a year-long extended mission, during which plans call for the acquisition of more than 80,000 additional images to support MESSENGER's science goals.