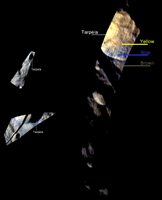 Annotated Version
Click on the image for larger view

These images of Tarpeia crater, near the south pole of the giant asteroid Vesta, were obtained by the visible and infrared mapping spectrometer on NASA's Dawn spacecraft. Colorized versions of the images show younger material with abundant pyroxene (an iron- and magnesium-rich material) and older layers with less pyroxene.

In the colorized images, scientists assigned red to the 1.9-micron wavelength of reflected light, green to the 1.5-micron wavelength and blue to the 1.2-micron wavelength. In the resulting image, the brown and yellow materials have similar composition, but the brown material receives less illumination from sunlight and appears darker. The material on the edge of the crater rim that appears blue in these images suggests a different, fresher material. This material must have been exposed during a landslide or a similar recent event that occurred on the side of the crater. Researchers think the blue areas have been less altered over time, preserving more of the original material of Vesta.

The Dawn mission to Vesta and Ceres is managed by NASA's Jet Propulsion Laboratory, a division of the California Institute of Technology in Pasadena, for NASA's Science Mission Directorate, Washington. UCLA is responsible for overall Dawn mission science. The visible and infrared mapping spectrometer was provided by the Italian Space Agency and is managed by the Italy's National Institute for Astrophysics, Rome, in collaboration with Selex Galileo, where it was built.