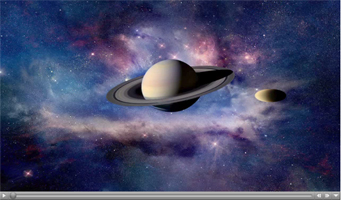 Saturn's gravitational pull on Titan, its largest moon, varies as Titan orbits along an elliptical path around the planet every 16 days. As Titan nears the closest point in its orbit around Saturn (pericenter), it feels the maximum gravitational pull. At the farthest point in its orbit (apocenter), Titan feels the minimum gravitational pull. This varying pull causes bulges on Titan, also called solid "tides." Near the middle of Titan's orbit around Saturn (quadrature), there is still sufficient pull to cause a gravitational distortion, or deviation from a spherical shape. Tides on Titan raised by Saturn's gravity can be as high as 30 feet (10 meters).

The change in shape causes a redistribution of mass in the moon and therefore a change in the gravity field, which is measured by Cassini in the form of the change in acceleration of the spacecraft as tracked by microwave radio links with the ground antennas of NASA's Deep Space Network.

Since the amplitude of solid tides depends on the overall rigidity of the body's interior and on the strength of the gravitational pull of nearby objects, scientists calculate that Titan must have a liquid ocean at depth to accommodate this amount of tidal deformation.

The Cassini-Huygens mission is a cooperative project of NASA, the European Space Agency and the Italian Space Agency. The Jet Propulsion Laboratory, a division of the California Institute of Technology in Pasadena, manages the mission for NASA's Science Mission Directorate, Washington, D.C. For more information about the Cassini-Huygens mission visit http://saturn.jpl.nasa.gov .