Views of the Snowman 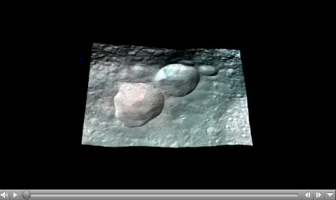 The images were obtained during Dawn's high-altitude mapping orbit, which averaged about 420 miles (680 kilometers) in altitude and took place from Sept. 30 to Nov. 2, 2011. The resolution during that orbit was about 200 feet (60 meters) per pixel.