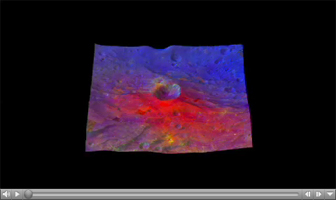 This movie from NASA's Dawn mission shows a 3-D, colorized rendering of Oppia Crater near the equator of the giant asteroid Vesta. Oppia is about 21 miles (34 kilometers) across.

The movie is based on multicolor data from Dawn's framing camera that are wrapped on a topographical model of Vesta's surface. The framing camera has seven color filters that allow it to image Vesta in a number of different wavelengths of light. Being able to image in many wavelengths enhances features and colors that would otherwise be indistinguishable to the human eye. In this color scheme, scientists assigned different color channels to specific ratios of brightnesses at different wavelengths. In this scheme, green shows the relative strength of a particular mineralogical characteristic -- the absorption of iron. Brighter green signifies a higher relative strength of this band, which indicates chemistry involving pyroxene. On the other hand, reddish colors indicate either a different mineralogy or a more strongly weathered surface.

The images were obtained during Dawn's high-altitude mapping orbit, which averaged about 420 miles (680 kilometers) in altitude and took place from Sept. 30 to Nov. 2, 2011. The resolution during that orbit was about 200 feet (60 meters) per pixel.