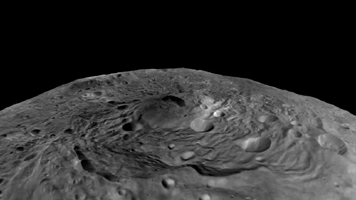 Scientists with NASA's Dawn mission have created perspective views of the Rheasilvia impact basin on the giant asteroid Vesta. Rheasilvia is located in Vesta's southern hemisphere.

The movie shows 360-degree views from inside Rheasilvia. The black-and-white perspective view was made by laying a global image mosaic from Dawn's survey phase (1,700 miles or 2,750 kilometers in altitude) over a topographic shape model. The colorized view was made by laying a color-coded height map over the topography. Red indicates higher areas and blue indicates lower areas. The central mountain is approximately 110 miles (180 kilometers) wide and 12 to 15 miles (20 to 25 kilometers) tall. Cliffs 9 to 12 miles (15 to 20 kilometers) high are seen along parts of the edge of the basin.

A still image showing the black-and-white view from the Rheasilvia rim, with the corresponding colorized topography image, is also included here.

The images used to create these vistas were obtained by Dawn's framing camera from Aug. 11 to Nov. 2, 2011.