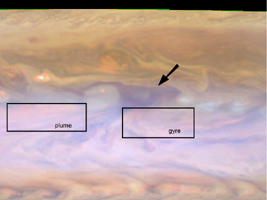 The dark hot spot in this false-color image from NASA's Cassini spacecraft is a window deep into Jupiter's atmosphere. All around it are layers of higher clouds, with colors indicating which layer of the atmosphere the clouds are in. The bluish clouds to the right are in the upper troposphere, or perhaps higher still, in the stratosphere. The reddish gyre under the hot spot to the right and the large reddish plume at its lower left are in the lower troposphere. In addition, a high, gauzy haze covers part of the frame. An annotated version of this image highlights the hot spot in the middle with an arrow and boxes around the plume and the gyre.

This image was taken on Dec. 13, 2000, by Cassini's imaging science subsystem.

The Cassini-Huygens mission is a cooperative project of NASA, the European Space Agency and the Italian Space Agency. The Jet Propulsion Laboratory, a division of the California Institute of Technology in Pasadena, manages the mission for NASA's Science Mission Directorate, Washington. The Cassini orbiter and its two onboard cameras were designed, developed and assembled at JPL. The imaging operations center is based at the Space Science Institute in Boulder, Colo.

For more information about the Cassini-Huygens mission, visit http://www.nasa.gov/cassini and http://saturn.jpl.nasa.gov/ .