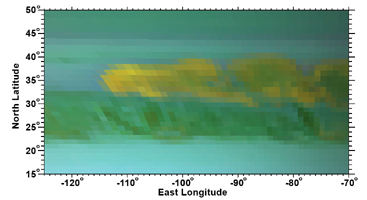 This set of images from NASA's Cassini mission shows the turbulent power of a monster Saturn storm. The visible-light image in the back, obtained on Feb. 25, 2011, by Cassini's imaging camera, shows the turbulent clouds churning across the face of Saturn. The inset infrared image, obtained a day earlier, by Cassini's visual and infrared mapping spectrometer, shows the dredging up of water and ammonia ices from deep in Saturn's atmosphere. This was the first time water ice was detected in Saturn's atmosphere. The storm, first detected by Cassini's radio and plasma wave subsystem in December 2011, churned around the planet in a band around 33 degrees north.

The visible-light image can be seen separately at PIA12826 .

The Cassini-Huygens mission is a cooperative project of NASA, the European Space Agency and the Italian Space Agency. JPL manages the mission for NASA's Science Mission Directorate, Washington. The California Institute of Technology in Pasadena manages JPL for NASA. The VIMS team is based at the University of Arizona in Tucson. The imaging team is based at the Space Science Institute, Boulder, Colo.