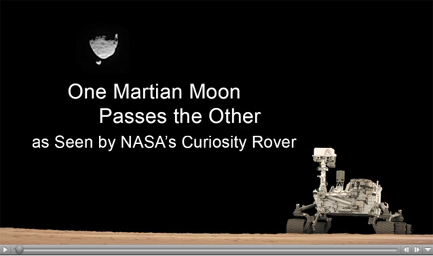 This movie clip shows the larger of Mars' two moons, Phobos, passing in front of the smaller Martian moon, Deimos, as observed by NASA's Mars rover Curiosity. The series of 41 images is shown at increased speed. The actual elapsed time is 55 seconds.

The images were taken by the telephoto-lens camera of the Mast Camera pair (right Mastcam) on Curiosity on Aug. 1, 2013, during the 351st Martian day, or sol, of Curiosity's work on Mars. These observations of Phobos and Deimos help researchers make knowledge of the moons' orbits even more precise.

On Phobos, Stickney Crater is visible on the bottom. It is on the leading hemisphere of Phobos. Hall Crater, in the south, is the prominent feature on the right hand side.