Lakes Through the Haze 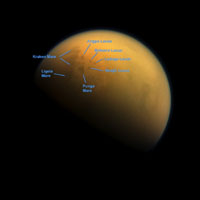 Using a special spectral filter, the high-resolution camera aboard NASA's Cassini spacecraft was able to peer through the hazy atmosphere of Saturn's moon Titan. It captured this image, which features the largest seas and some of the many hydrocarbon lakes that are present on Titan's surface. Titan is the only place in the solar system, other than Earth, that has stable liquids on its surface. In this case, the liquid consists of ethane and methane rather than water. Figure 1 indicates the names assigned to the visible features. Titan's largest sea is Kraken Mare.

This view looks towards the side of Titan (3,200 miles or 5,150 kilometers across) that leads in its orbit around Saturn. North on Titan is up and rotated 36 degrees to the left. Images taken using red, green and blue spectral filters were combined to create this natural-color view. The images were taken with the Cassini spacecraft narrow-angle camera on Oct. 7, 2013.

The view was acquired at a distance of approximately 809,000 miles (1.303 million kilometers) from Titan. Image scale is 5 miles (8 kilometers) per pixel.