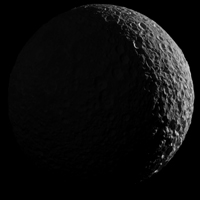 In its season of "lasts," NASA's Cassini spacecraft made its final close approach to Saturn's moon Mimas on January 30, 2017. At closest approach, Cassini passed 25,620 miles (41,230 kilometers) from Mimas. All future observations of Mimas will be from more than twice this distance.

This mosaic is one of the highest resolution views ever captured of the icy moon.

Close approaches to Mimas have been somewhat rare during Cassini's mission, with only seven flybys at distances of less than 31,000 miles (50,000 kilometers).

Mimas' surface is pockmarked with countless craters, the largest of which gives the icy moon its distinctive appearance. (See PIA12568 for more info on Mimas' distinctive crater, Herschel.)

Two versions of the mosaic are provided. In one, the left side, which is lit by reflected light from Saturn, has been enhanced in brightness in order to show the full surface. The second version features more natural illumination levels (Figure 1).

Imaging scientists combined ten narrow-angle camera images to create this mosaic view. The scene is an orthographic projection centered on terrain at 17.5 degrees south latitude, 325.4 degrees west longitude on Mimas. An orthographic view is most like the view seen by a distant observer looking through a telescope.

This mosaic was acquired at a distance of approximately 28,000 miles (45,000 kilometers) from Mimas. Image scale is approximately 820 feet (250 meters) per pixel. The images were taken in visible light with the Cassini spacecraft narrow-angle camera on Jan. 30, 2017.