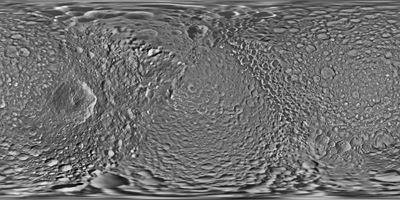 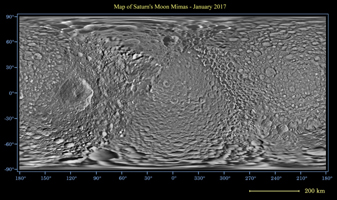 Labeled
Click on an image above for larger view

This global map of Saturn's moon Mimas was created using images taken during Cassini spacecraft flybys. The moon's large, distinguishing crater, Herschel, is seen on the map at left.

The map is an equidistant (simple cylindrical) projection and has a scale of 710 feet (216 meters) per pixel at the equator. The mean radius of Mimas used for projection of this map is 123.2 miles (198.2 kilometers). The resolution of the map is 16 pixels per degree.

This product is an update to the map released in August 2012 (see PIA14926 ). The update includes new images for almost half of the moon's surface, with new images from two close flybys, in Nov. 2016 and Feb. 2017. The moon's western hemisphere, south pole and parts of the eastern hemisphere received updates in this version.

The Cassini-Huygens mission is a cooperative project of NASA, the European Space Agency and the Italian Space Agency. The Jet Propulsion Laboratory, a division of Caltech in Pasadena, manages the mission for NASA's Science Mission Directorate, Washington, D.C. The Cassini orbiter and its two onboard cameras were designed, developed and assembled at JPL. The imaging operations center is based at the Space Science Institute in Boulder, Colo.