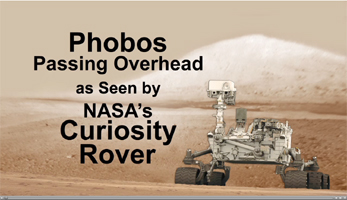 This movie clip shows Phobos, the larger of the two moons of Mars, passing overhead, as observed by NASA's Mars rover Curiosity in a series of images centered straight overhead starting shortly after sunset. Phobos first appears near the lower center of the view and moves toward the top of the view. The clip runs at accelerated speed; the amount of time covered in it is about 27 minutes.

The 86 frames combined into this clip were taken by the rover's Navigation Camera (Navcam) on the 317th Martian day of Curiosity's work on Mars (June 28, 2013, PDT). The apparent ring about halfway between the center of the frames and the edges is an artifact of the imaging due to scattering of light inside the camera.