This atlas of the giant asteroid Vesta was created from images taken as NASA's Dawn mission flew around the object, also known as a protoplanet. The set of maps was created from mosaics of 10,000 images from Dawn's framing camera instrument, taken at a low altitude of about 130 miles (210 kilometers).

The maps are mostly at a scale about that of regional road touring maps, where every inch of map is equivalent to a little more than 3 miles of asteroid (one centimeter equals 2 kilometers). 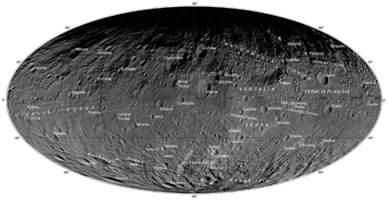 Vesta Map
Click on the image for full resolution image

The Dawn mission to Vesta and Ceres is managed by NASA's Jet Propulsion Laboratory, a division of the California Institute of Technology in Pasadena, for NASA's Science Mission Directorate, Washington. The University of California, Los Angeles, is responsible for overall Dawn mission science. The Dawn framing cameras were developed and built under the leadership of the Max Planck Institute for Solar System Research, Katlenburg-Lindau, Germany, with significant contributions by DLR German Aerospace Center, Institute of Planetary Research, Berlin, and in coordination with the Institute of Computer and Communication Network Engineering, Braunschweig. The framing camera project is funded by the Max Planck Society, DLR and NASA.