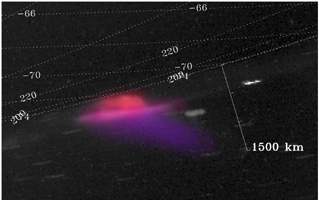 The color difference occurs because Earth's auroras are dominated by excited nitrogen and oxygen atoms and molecules, and Saturn's auroras are dominated by excited forms of hydrogen. Within each element, colors can differ because of atmospheric density, the levels of the atomic version of an element versus the molecular version, and the energy of impacting electrons.

The height of this particular part of the aurora is about 870 miles (1,400 kilometers).

This image from Cassini's imaging cameras shows particularly bright auroras on Nov. 29, 2010. Star tracks appear in the clear sky due to the spacecraft's motion. Color was derived from the measurements in red, green and blue filters. In the annotated version, the longitude and latitude are marked on the planet with white dashed lines. An unannotated version is also available.