Ride Along with MESSENGER: Movie 1 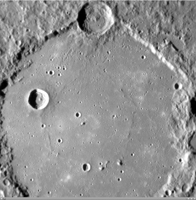 This movie was assembled from 284 individual NAC images. Most of the images were acquired four seconds apart, the fastest that MDIS is capable of taking full resolution images, but the movie is shown with 15 images per second. In the second half of the movie, Mirni Rupes can be seen in the top right.

These images were acquired as part of the NAC ride-along imaging campaign. When data volume is available and MDIS is not acquiring images for its other campaigns, high-resolution NAC images are obtained of the surface. These images are designed not to interfere with other instrument observations but take full advantage of periods during the mission when extra data volume is available.

The MESSENGER spacecraft is the first ever to orbit the planet Mercury, and the spacecraft's seven scientific instruments and radio science investigation are unraveling the history and evolution of the Solar System's innermost planet. MESSENGER acquired over 150,000 images and extensive other data sets. MESSENGER is capable of continuing orbital operations until early 2015.

For information regarding the use of images, see the MESSENGER image use policy .