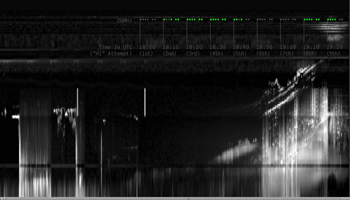 During its close flyby of Earth, NASA's Jupiter-bound Juno spacecraft listened for a coordinated, global transmission from amateur radio operators using its radio and plasma wave science instrument, known as Waves. This spectrogram and audio file illustrate that Waves did indeed detect the message.

The video presents natural radio signals from Earth's magnetosphere along with pieces of the repeated Morse code message, recorded by Juno and turned into sound.

In Morse code, characters are formed using dots and dashes, or "dits and dahs." The word "HI" is formed by transmitting four dits for "H," followed by a space and then two more dits for "I." The full message was transmitted 16 times, beginning again every 10 minutes, starting at 18:00 UTC (2 p.m. Eastern time) on Oct. 9, 2013. Each dit lasted 30 seconds. Radio operators used two webpages (provided by NASA's Jet Propulsion Laboratory and the Juno team) to synchronize their transmissions.

The green dots at top represent pieces of the repeated message that Juno was able to detect. Grey dots represent parts of the message that were being transmitted, but which were not clearly detected by the Waves instrument.

More than 1,400 radio operators from around the world confirmed their participation in the activity. Given the variable conditions in Earth's ionosphere and uncertainties in how many hams would participate, scientists on the Waves team were not sure the signal could be detected. They were ecstatic when the message could be readily seen in the data.

The Waves data presented here cover the period from an hour before the ham radio transmissions began until about 19:20 UTC, which was the time of Juno's closest approach to Earth. A few minutes after closest approach, Juno entered safe mode, which caused its science instruments (including Waves) to be powered off. The spacecraft returned to normal operations a few days after the flyby.

This activity was conceived by the Juno team for the purpose of public engagement.

A four-minute mini-documentary depicts the efforts of a few of the amateur radio operators who participated in the "HI Juno" event: http://youtu.be/_yqHy_MpNiQ .

NASA's Jet Propulsion Laboratory, Pasadena, Calif., manages the Juno mission for the principal investigator, Scott Bolton, of Southwest Research Institute in San Antonio. The Juno mission is part of the New Frontiers Program managed at NASA's Marshall Space Flight Center in Huntsville, Ala. Lockheed Martin Space Systems, Denver, built the spacecraft. JPL is a division of the California Institute of Technology in Pasadena. The radio and plasma wave science team is based at the University of Iowa, Iowa City.