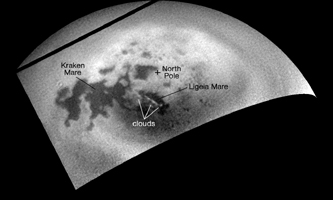 Cassini scientists noted a decrease in clouds everywhere on Titan after a large storm in 2010, and expected clouds to return sooner, based on computer models of Titan's atmosphere. Continued monitoring should help them determine if the clouds' appearance signals the beginning of summer weather patterns, or if it is an isolated occurrence.

A streak of methane clouds is seen here, near center, over the large methane sea known as Ligeia Mare. A movie sequence, PIA18420 , shows these clouds in motion over a two-day period.

An image taken on July 21, 2014 using the Cassini spacecraft's narrow-angle camera was reprojected to create this orthogonal view.